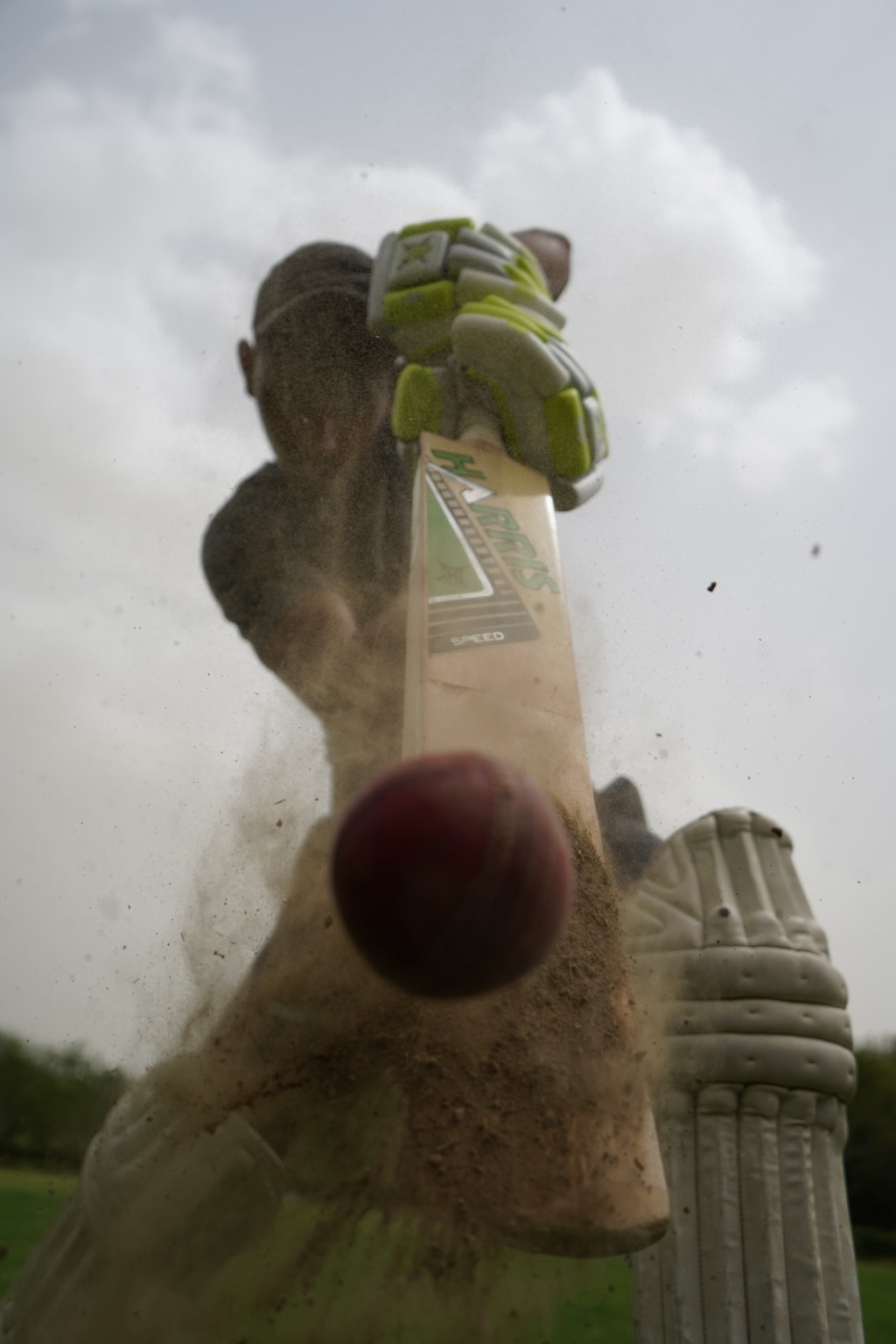 Hampton arrived at Alleyn to the seemingly forgotten sight of sunshine overhead and what looked to be an excellent cricketing surface. A shock to nobody, Hampton lost the toss with the home side electing to have a bat.

Looking to capitalise on the fine overhead conditions, the home side looked initially to settle well into their innings. Both opening batsmen looked to be comfortable in defence, however, a tight couple of overs from the Zinc-clad bowling all-rounder James Robottom built some pressure. After punishing the odd loose ball at the other end from Boulton, the batting all-rounder, pressure finally told as a yorker snuck through the defence of Will Deasy to give The Hill the early breakthrough they wanted. Alleyn found themselves 13-1.
Just 6 runs were conceded before the nagging “Division 1 line” of Robottom proved too much for the number 3, dismissing him clean bowled. 19-2.

An inspired piece of captaincy from the Captain saw Boulton replaced with the Old Pro, Bob Fullicks. The change paid off immediately. Consistent line and length proved too much on a surprisingly difficult pitch for the Alleyn batsmen, with one chipping back to be comfortably caught. A further “nutty seed” left the batsman clean bowled after shouldering arms, producing a celebration Alan Shearer would have been proud of. A fine spell from Fullicks, with overall figures of 3-20 (10).

Further wickets included one of the finest deliveries a spin bowler could hope to produce from Bennett, a clean bowled from Kashif “Golden arm” Sheik, and Boulton and Robottom finishing with 3 and 2 each respectively.

Hampton were set a sub-par total of 80 to win the game providing the allure of a sacred early finish, and more importantly, early beers.

A typically solid start from Sones and Wood saw Hampton reach 16, before a good catch at square leg removed Sones after what appeared to be a well-timed shot off his legs. The fall of Wood (15), Bennet (12), and Newton-Savage (2) left the game in the balance. Players know all too well that cricket is a cruel mistress, fortunately, her wrath was not felt this day.

After deciding to play a rain card on the sunniest weekend of the season so far, a watchful, if not slightly weary 7* from Harry Coates, ably supported by a destructive Sheikh innings of 23(20), ensured Hampton got within touching distance of their target. When Sheikh fell, Hampton needing just 6 runs to win, Hampton’s younger Newton-Savage, Henry, stepped up to provide the quality needed to get over the line and enjoy those sweet, sweet, 4.30pm beers.

Player of the Match: Rob Fullicks 3-20 off 10 overs including 3 maidens.

Hampton Hill won the toss and skipper Joe Porter from the phone who was running late decided to bat first.

The Hill got off to a good start with some lusty blows from James Everett early on.

Before a wobble of wickets fell of opening batsmen Everett and Adam Oliver.

Charlie Newton-Savage on his return from injury looked good with some fine cover drives in a knock of 24.

The Hill were in a difficult position at 69-3 before a 103-run partnership between Skipper Joe and off the back of his half century the day before in the Surrey Slam Jordan Gomez continued this.

Gomez was then removed for 61 in a fine innings to guide the Hill to a far better situation in the game.

Joe was then joined the crease by Ed Cinderey who had a nice little cameo of 37 supporting the skipper before he was then removed for 81 in another fine innings.

Late cameos from Max and Mike helped the Hill propel to an impressive score of 265.

The Hill got off to a good start in defending the total. George Barrett got his areas right from the get-go and picked up an important first wicket.

Alleyn then built a good partnership to get a foothold in the game getting to 142-3 before three quick wickets for three runs.

Tight bowling throughout the middle from Joe Ayley and James Everett piled the pressure back on to Alleyn.

Joe Ayley ended with figures of 9 overs 2-34 to never allow Alleyn to really look close in the chase.

With then Mike Murton and Charlie Newton-Savage continuing the theme of bowling good tight lines not allowing the Alleyn batsman to have many scoring opportunities.

The opposition struggled however managed to get to a score of 211 however a fine batting performance meant that it was always going to be a tough ask.

The Hill continue their perfect start in the league taking them to 4 wins from 4 in a promotion pushing year.

Player of the Match: Captain Joe Porter with 81 off 105 deliveries to propel the Hill to a winning score

The 3XI good start to the season came to an abrupt holt away at Kempton. Having called incorrectly Kempton elected to bat. Dan Mackinney (2-42) got an early break through but Kempton new boy Jay Syed supported by Malcom Burt batted sensibly as Kempton kept wickets in hand for the end of innings.

For the second week running Hampton Hill change bowlers did not have the control as Kempton started putting bat to ball. Lewis Cole kept well on a difficult track. The one highlight was the ever-young Warren (0-14) twirling away. The Hill had no luck as the ball was always just out of hand.


In return Hampton Hill did not show the patience of the week before. Will Owens got a good inswinger but Bhatti, Fernando & Butt were all out the same way, head up as canny Nip Makwana blew the batting away with flighted balls. Warren showed how to bat but the rest could not support him.

Player of the Match: Warren Carr 21 off 35 the only real resistance in the run chase

A weakened 4th XI took on OH and made 140 after being 60 for 1. Some indifferent middle order batting letting us down. However, with some good top order batting from Oisin Shrivastava (42), Simon Burke (29*) and Neil Baverstock (25)

With limited bowling options Fallows and Knight bowled the opening 16 overs restricting Old Hamptonians to 33 for 2. However, after that OH opened and although Charlie Murphy grabbed a wicket Old Hamptonians made the target with ease, winning by 7 wickets.

Player of the match: Archie Knight 8 overs for 0-19 bowling a tight spell with the new ball to put pressure on Old Hamptonians.

The Hill were put into bat and batted out the 40 overs. There was a slow run rate against a team with 3 decent, accurate bowlers. Only managed 116 which was never going to be enough.

The opposition were all adults and had four or five very good cricketers, we suffered loss of a couple of players and were mainly colts with one u11 playing. Great that the team stuck at it. Bowling was a bit too loose, apart from Freddie Steel who was on the money. Kudos to Mae for a great catch, Ben for his first couple of overs for the club Jamie F for his contribution of 29 and Will for his first bowling spell for an adult Saturday team.

Player of the Match: Freddie Steel for some fine tight bowling opening up.

TTCC regained the Anil Patel trophy in a free scoring game.  TTCC won the toss and elected to field.  HHCC set a good total with a solid start by Ajmal Bhatti (49) and Peter Zonneveld (42).  James Johnson then struck a fine 100 with 14 fours and a six.  He was well supported at the end of the innings by Lewis Cole who scored 20 in a partnership of 48.

Andrew Blair and Peter Zonneveld gave HHCC a good start in the field, but the game was secured by a chanceless hundred by Max Macleod who was well supported by Akram Hilmy (56) and Jawad Tahir (42*).

Player of the Match: James Johnson with a fine century

Sunday Away 2nd XI lost to Sunbury by 33 runs

A day after the Championship play off final and the Champions League final understandably there were some sore heads.

Including Adam Mackinney whose opening spell really set the tone for The Hill with tight areas and serious pace.

He was well partnered by Ryan Exworth who on his return from injury the pair helped restrict Sunbury to 9-3 early in the innings.

The standards set by the opening pair were continued by Daniel Mackinney and Fergus Walsh who made sure that wickets would consistently fall to leave Sunbury in a bad position at 65-6.

Before in the usual spirit of Sunday cricket The Hill made sure that everyone was given a go including Adam Oliver’s first bowl of the season and Will Exworth.

Although skipper Rob Fullicks was then luckily told that Sunbury don’t cheat so we moved on.

Making sure that everyone had a game and were given a go Sunbury got to 179 all out.

It wasn’t the best start for the Hill as Sam snicked off to the keeper early in the chase.

Then James Robottom steadied the ship and seemed to be the only person to make batting look easy going on to score a fine half century.

Although a lack of runs around Robottom meant the Hill were to struggle to get near the total as wickets consistently feel around and the run rate continued to climb which isn’t a good combination.

Needing to defend 39 off the last over Sunbury made sure that they kept the field back with three men on the boundary just in case of a miracle, however a good cameo at the end from Adam Mackinney meant that Hampton Hill would look significantly closer to the total.

Player of the Match: Adam Mackinney for a quick and accurate (which we could have bowled them out but chose not to) and a solid 15* at the end of the innings.

Also, a mention for James Robottom on a fine half century.

The Hill got off to the perfect start on a sweltering day in the field when opening bowlers Max Goubert and Daniel Mackinney bowled tight overs to begin with.

The pair then both picked up their well-deserved wickets Max picking up figures of 1/21 off his 4 overs.

Then a wicket maiden for Adam Oliver in a carbon copy of the ball that got a wicket the day before, driving the ball straight to the safe hands of Rob Fullicks.

An 89-run partnership then spared the blushes of Super XI, which included a quality spell of bowling from Ben Blackshire who was unfortunate to walk away with no wickets.

1st XI players Rich Bennett (2-40) and Sam Fullicks (2-22) then came on in some very quick over rate and put a lid on the Super XI attack.

Archie Jones also picked up two wickets as the Super XI batsmen looked to target him including a 14 ball over.

Daniel Mackinney (2-30) then came back on and picked up the final wicket as the Hill restricted Super XI to 182 all out.

The Hill got off to a good start early on as Jake Wood and Ajmal Bhatti took the attack to the opposition bowlers.

However, Jake Wood was then removed for 24 to an unplayable delivery crashing in to off stump.

Some good cameos from Adam Oliver, Lewis Cole and Rich Bennett then followed leaving Hampton Hill in a good position of 125/5.

Sam Fullicks was the pick of the Hampton Hill batsmen scoring a fine 57 off 53 deliveries including crunching a pull shot over the roof of the club house.

The Hill were the carried over the line by the father son partnership of Rob and Sam to cap off an impressive victory for Hampton Hill.

Player of the Match: Sam Fullicks with a fine 2-22 off 5 overs and a very composed half century to guide The Hill home