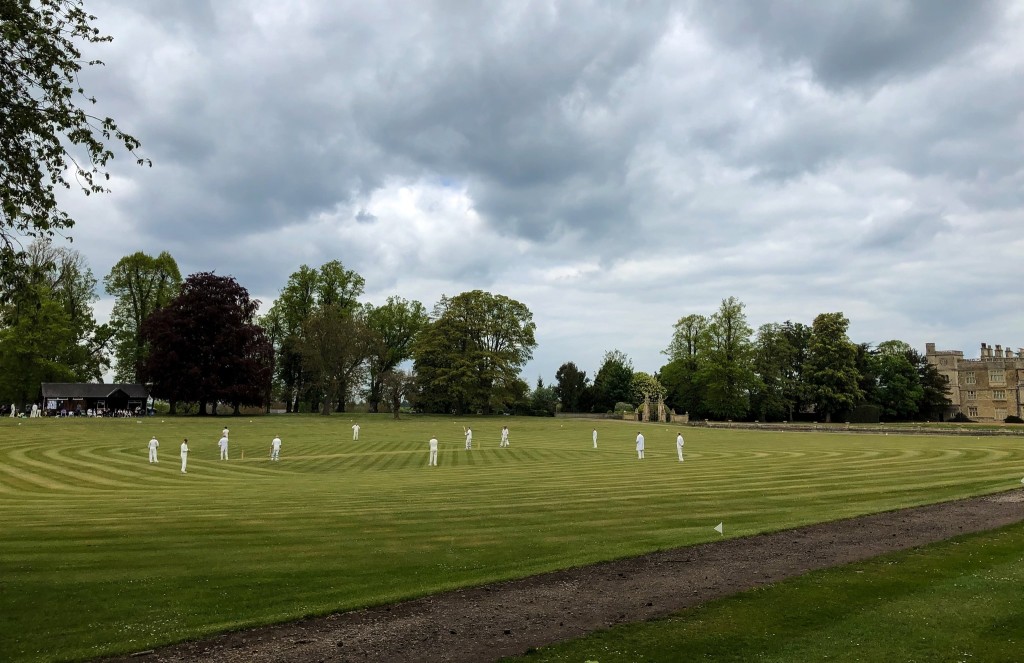 2 nd XI beat Kempton by 118 runs
An entertaining game for the 2nd XI on Saturday played under threat of rain thunderstorms
and cloudy skies.
Despite losing the toss and being asked to bat on a green wicket, there was a good start
with openers John Cadogan and Woody reaching 44 before JC snicked off to first slip. We
then suffered a few setbacks with the loss of Woody and Tom Coates, as well as Stuart
Barrs-James to a non-bouncing LBW before the ship was steadied by skipper Joe Porter,
Henry Newton-Savage (with an unlucky LBW) and Scott Mitchell.
Unfortunately, another mini collapse and the 2's were at 140-8 with 15 overs left to bat. A
great 50 partnership by seasoned professional Ian Exworth 31no, and Mike (Grant) Murton
with 25 and a cover drive display by Dave Coates saw the 2s reach 204 all out in 49 overs, a
tough target on a wicket that was seaming about.
A brief non tea interval and we resumed with the 2nd innings. A positive start from
Kempton saw them reach 18-0 before wickets from the Mitchell boys (AKA Fullicks and
Murton) in a devastating opening spell saw them collapse to 23-5.
A brief partnership aided by some choice shot selection saw a brief recovery by Kempton to
72-5 before the returning Exworth with 3-14 off 7 overs and some great 'darts' by Dave
Coates with 1-11 off 8 saw Kempton bowled out for 86 off 30 overs.
A great all-round display from the team with some great fielding and catching supporting
the bowlers.
A 2 from 2 start for the 2's but a long way to go this season!

3 rd XI rained off
Hampton Hill 4 th XI beat Twickenham CC 6 th XI by 97 runs
Much against the forecast the game started 15 mins late on a damp wicket. Excellent
batting by Paul Thornley and Neil Baverstock built a substantial 150 partnership before both
fell in close succession for 80 and 51 respectively. Some quick runs from Dharamvir Puri, Sim
and James Johnson at the end meant The Hill end on 217/2.

An excellent opening spell from Daniel Mackinney and Max Goubert restricted Twickenham
and then wickets began to fall, with 9 bowlers used and 5 amongst the wickets, Twickenham
ended on 115/7.
POTM: Paul Thornley for his fine 80 in an opening partnership of 155.

5 th XI abandoned due to rain against Sanderstead CC
The Hill lost the toss and were put into bat first in an arranged 35 over format.

Ed and Oisin put on 20 odd first wicket stand getting The Hill off to a solid start. Oisin was
then unfortunately run out after getting into a good position to build an innings. Jack got
more confident as the innings went on but was then bowled by a good delivery.
James Neville (The Earl) starred with the bat with a fine 53 to mark his first senior half
century for the club, after good blocking of the straight ball plus putting away the bad ball to
the boundary.

The Hill managed 128 which on a dry day and shorter grass could have been considerably
higher.

Ben Blackshire and Freddie Steel opened the bowling. Ben bowled with good pace with
away swing and was very dangerous throughout his spell. Freddie took wicket and bowled
with good control, pace, and length. Joseph Steel took 1 wicket with good turn and bounce
which could have been more but for a dropped catch and missed stumping. Will Smith
bowled very accurate and took LBW with match then called off due to rain.

In reply Sanderstead got to 75 for 3 after 21 overs before thunder and lightning stopped
play.

POTM: James Neville with 53 plus good chat and intensity in the field.
Mentions for both Steels, Ben Blackshire, Oisin and Ed with tidy performance behind
stumps.

Home side posted 117-4 before rain won the day. 2 wickets apiece for Taz and Aj. Joe Ayley
and Max Goubert also bowled well. There was a Champagne moment when a cracking slip
catch by Chris Warrens rolled back the years.
Before once again the weather was the winner of the day to cap off a frustrating wet week.
Hopefully the last of the bad weather!